Home » Man says he was attacked because he is in “total opposition of Black Lives Matter”. The Mans flies a Nazi flag from his car.

Man says he was attacked because he is in “total opposition of Black Lives Matter”. The Mans flies a Nazi flag from his car. 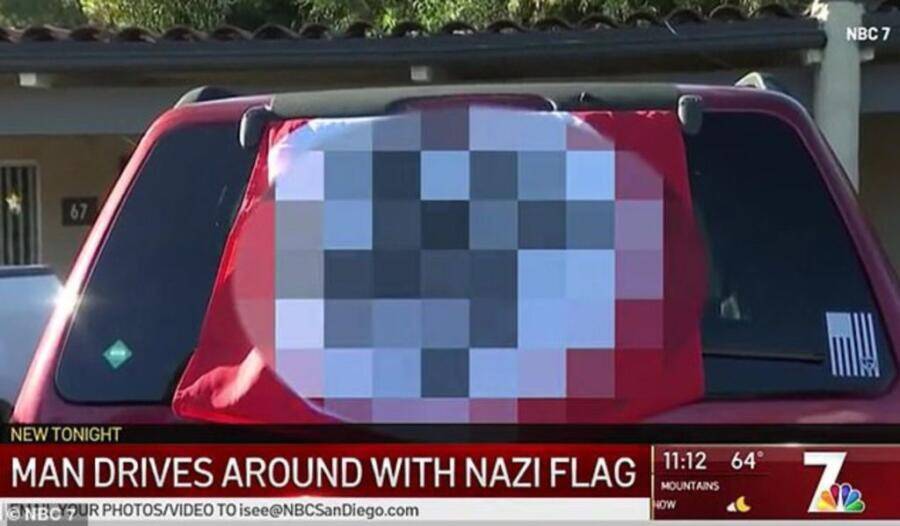 Jesus Seineke, who lives in Alpine, San Diego, flies a Nazi flag on the back of his SUV when he drives around his local area.

A man who who lives in Alpines, San Diego was seen flying a Nazi flag from his car. Jesus Seineke told to NBC7 tha he was doind that show his “total opposition of Black Lives Matter or supporting anything to do with gays”.

Mr Seineke, who is the father to two children, said that on 28 June he was attacked and had his flag damaged when he was parked outside a Rite Aid pharmacy, but was not injured.

Some of Mr Seineke’s neighbours told NBC that they are disgusted by the flag on the back of his car, and he himself admits that he hides it when he is home in order to prevent retaliation.

Jerry Bulinski, who lives in a neighbouring area, told NBC that the flag “just represents the wrong ideals. It’s just a horrible part of history and it shouldn’t be celebrated.”

Another resident, Nycki Koch added: “Sometimes when I see it I think, ‘Oh my God, what is happening here’.”

Last month, Kyndal McVey in Oklahoma was shot multiple times in the back while attempting to remove a Nazi flag from a man’s front garden, after she had been at a party near his house.

When she attempted to take one of the two Nazi flags flying in the front garden of Alexander Feaster’s house, he allegedly shot her four times in the back with a semi-automatic rifle.

She is expected to recover from her injuries, but the authorities confirmed that she could face charges for attempting to take the flag from Mr Feaster’s property.