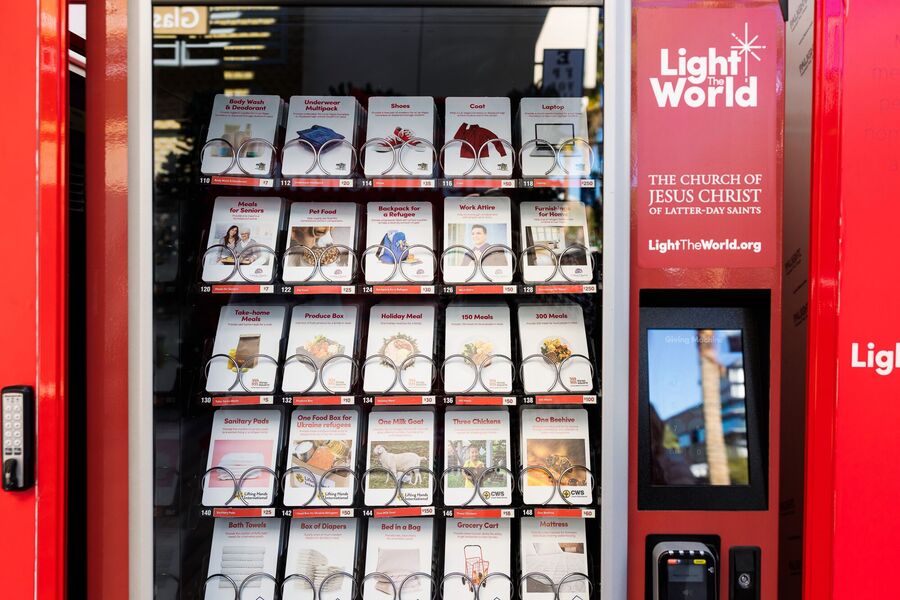 Giving Machines of The Church of Jesus Christ of Latter-day Saints’ #LightTheWorld campaign are opening in 17 states in the U.S. and five other countries around the world. Eight cities will be visited by mobile versions of the giving-focused vending machines.

Every year when they are installed, the Light the World Giving Machines are hard to miss. They’re huge, bright red vending machines set up in very public spaces, often with long lines and crowds of people gathered around waiting to take photos or make their donation. And with all that noise, it’s easy to see why they catch the attention of news media and celebrities. last year, Dan Reynolds of Imagine Dragons unveiled a machine in Las Vegas, and Drew Barrymore praised the NYC machines on her talk show.

The actor Paul Rudd, actor Eric Stonestreet, and NFL tight end Travis Kelce, and Kansas City Chiefs’ head coach Andy Reid have all shared videos voicing their support for the Giving Machines and encouraging fans and other Kansas City natives to get involved and donate.

Chiefs’ head coach Andy Reid explains how much he and his family love Christmas in Kansas City and have started new holiday traditions, including the Giving Machines. “Imagine going to a vending machine and being able to purchase food, clothing, supplies, or medicine for people right here in our Kansas City community. … I think it’s so great that we can teach our grandchildren that it is so much better to give to others than to receive.”

In his video, actor Paul Rudd, who grew up near Kansas City, shared, “You can buy cool items, and it helps support charities—Children’s Mercy Hospital [in Kansas City] being one of them—but places all over the world. They’re big and they’re red! We all love big and red in Kansas City—Looking at you, Andy Reid.”

Actor Eric Stonestreet of Modern Family fame who is also a Kansas City native said in his video that donating to the Giving Machines is a great way to be on Santa’s nice list this year. “Go down, make a donation, [and let’s] prove that Kansas City is the greatest city in the world!”

Where the mobile Giving Machines are now

The mobile Giving Machine in Arizona will be available in:

The mobile Giving Machine in the Southeast U.S. will be available in:

Here are the Giving Machines locations and opening dates listed by state. Donations will be accepted through Jan. 1, 2023.

Here are the locations and opening dates of the Giving Machines available internationally, listed by country. Like the American machines, they will close after Jan. 1, 2023.